Researching hit-testing of sub views ==This article is a work in progress.== Still implementing the research. ==The article will be cleaned up and condensed once the implementation is further along and tested/confirmed.==

You need to be able to detect sub views and their hit boundaries. It needs to work in an interactive / animatable environment.

The above example shows how you can create your own ScrollBar component. Code for this is on github.

IMPORTANT CONCEPT TO UNDERSTAND: There are two interaction schemes to consider: 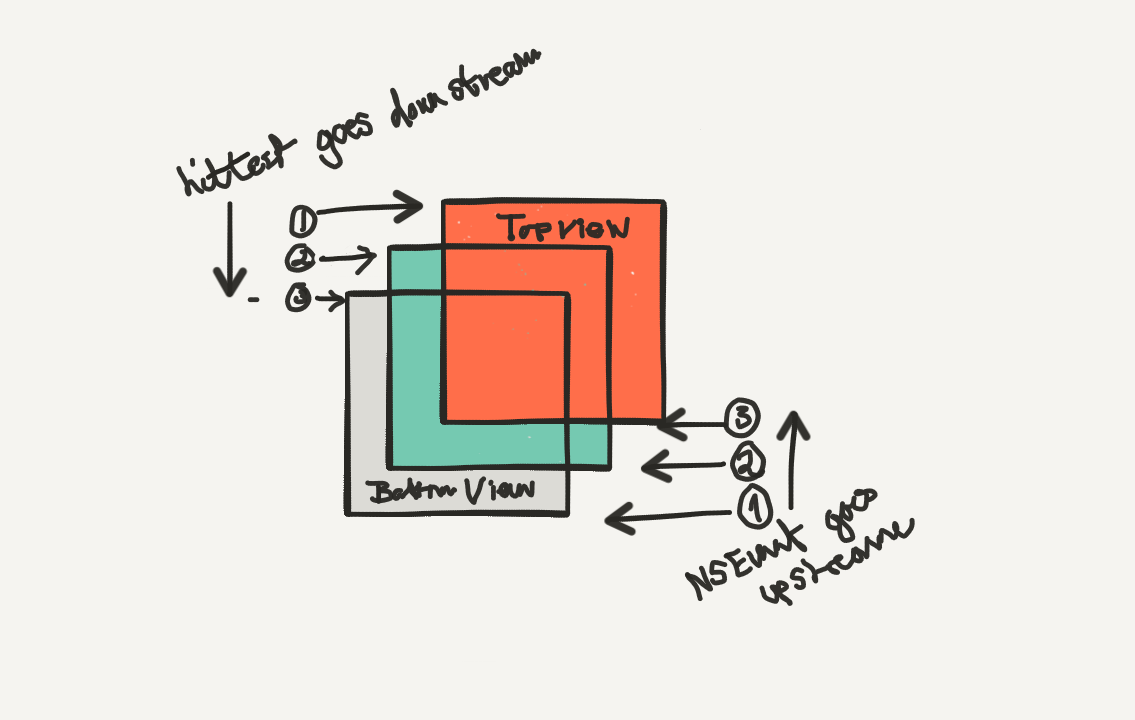 IMPORTANT 1: Read the ==Core graphics animation book== front to back (you need to do this at some point anyway)

IMPORTANT 2: Note that an NSView can have ==multiple tracking areas and you cannot update the old ones==, so if you need to update a tracking area, remove the old one and just add a new one. Don’t forget to release your old tracking areas, or you’ll end up with a nice memory leak (<–This may not be relevant for swift) in swift you may need to set old NSTtrackingArea instances to nil when they need to update. You would have to make an implementation that can add and remove NStTrackingArea instance to the Element view class.

EXTREMELY IMPORTANT 1: If you hitTest a view that has a frame.size of zero the hit test wont go through. As apple thinks since there is no frame there is nothing to hit. The thing is that CALayer backed views doesnt need a frame size to show content. And so we need hitTest even if the frame.size is zero. One way to do this is to implement your own hitTest method. Loop through children and hitTest them as well. 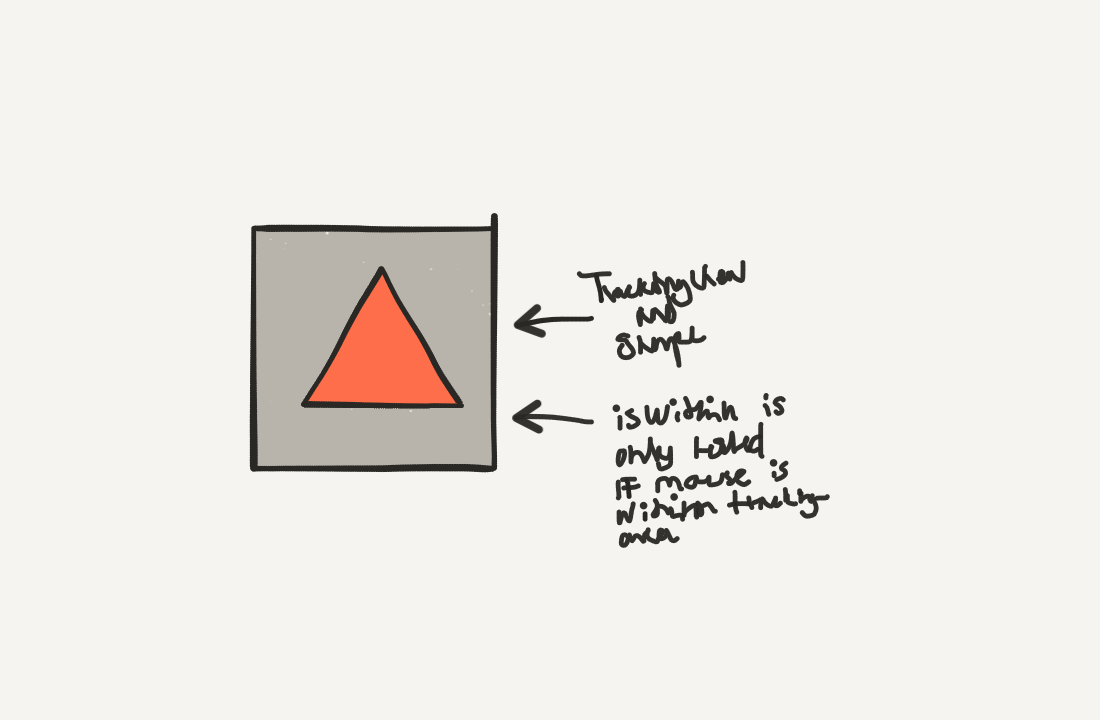 Idea 2: NSResponder etc works on NSViews. Since skin is also a view you could try to employ a scheme were you use NSTrackingArea on the Skin as well and then pass the event up to the parent view were it would be handled as well.

Idea 3: bad idea, would clutter up the Element class.

Idea 4: (looks promissing) In the init of the NSTrackingArea there is ==The third parameter (owner)== specifies where the event messages should be sent to, this is usually referenced to self. But could maybe be set to The parent: the Element instance.

Idea 5: You don’t implement tracking-area on the sub-views. Instead you just inform the parent that the subview has changed its size. And then

problem with this is rounded corners, do they return their view if you hit outside the round-corner but inside the views frame? ==This must be tested before going forward== The implication of this is that you will need to implement isPointWithinPath on each subview. (luckely apple has code for this, even support for hull-testing, think vector with holes in them)

Idea 6: Ok i got it. The skin views should each override the hitTest. Element it self should not. Then you just add the .

Idea 7: SubViews and sub CALayers should automatically attach them self in the bounding area that is considered interactive of their parent.

Observation 1 If you override a hitTest then no subView will receive subsequent hit-tests. (forwarding the hit test is an option)

observation 2 Not true. However the frame.size of the subView must be within the mouseDown event. If its less then no mouseDown event will be triggered on that view.

observation 4 If you override hitTest and return self or nil then self will be the upmost hit view. If you return nil then the parent view will keep searching its children for a view that is the lowest in the stack. (note however that the sub-children of the child you returned nil will not be included in the subsequent search) 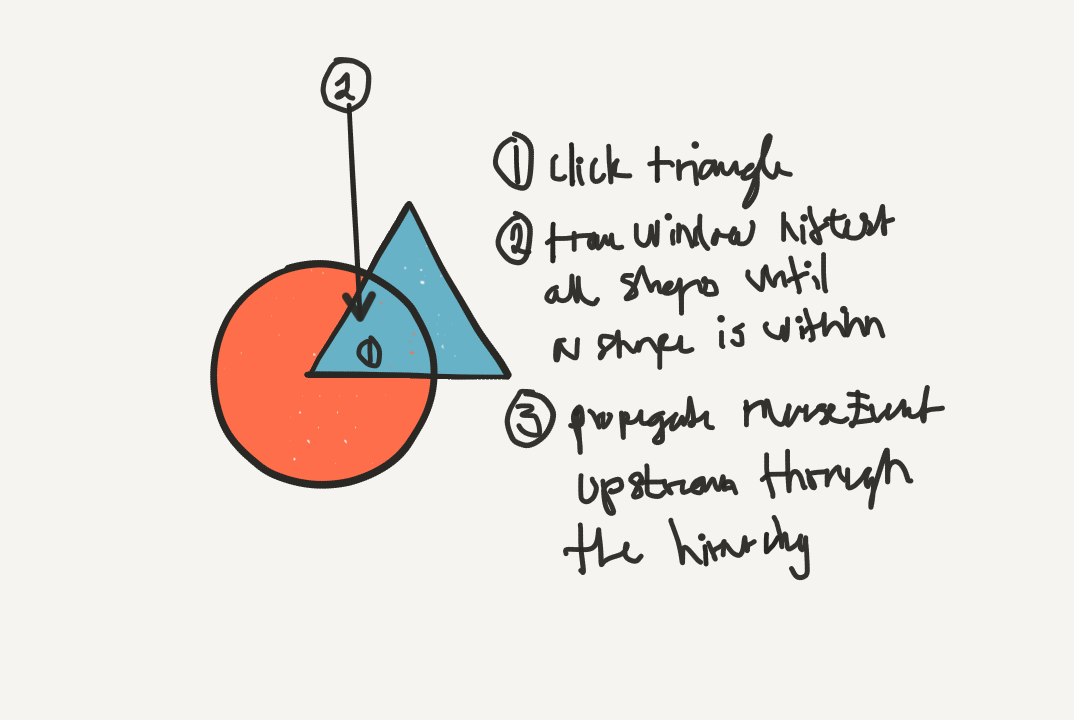 Observation 8: NSView can have a frame.size of zero. The hitTest will fire and the mouseDown will be triggered. However that is not try for subsequent children views. Which you would need, think Lists, Scrollviews etc.

Write about how you might do tracking area hitTesting on the skins them selfs, and have the mouseMove method implemented in the Element. I think this could be done, test it!

Observation 9: If you hitTest and return nil the mouseDown method in that view wont be triggered. If you return self it will.

Observation 10: MouseMove works on subview in views that has no frame.size if the subView has set a TrackingArea

Observarion 11: nextResonder is a reference to the next view in the chain. If you are in a subView the nextResponder will be the parent and so on.

Observation 12: if frame.size doesnt contain the subviews in the current implementation of StyleKit then the subViews doesn’t get the mouse down event.

Possible solution 1: So a view with a frame.size set to zero will receive hitTest and mouseDown if hitTest returns self. Now you could then manually ask your children for a hitTest. and they in turn could answer with a self if they are hit inside their geom.

-What does this solution offer? The Element can be whatever size it wants to be. -Whats the problem with this solution? The children of Element will need to be manually passed the hitTest as well. -why is it so important to set frame.size to zero? well think about skins that animate outside the initial frame size etc.

==This is not a great solution though. Do more research!==

Possible solution 2: MouseTracking works on subViews of views that has no frame.size. So detecting mouse down must also somehow work. Get it to work and its solved. It can be done by iterating children of a view and just passing the mouseEvent down. the same could be done for hit-testing as well, but i feel there is a better way. I feel its built in im just missing something. This solution works though so you could go with it and just move on.

Possible solution 3: use addLocalMonitorForEventsMatchingMask for everything, as it doesn’t require the parent to have a frame.size or hitTests overrides or mouseDown method overrides. It just listens to mouse down events. regardless of where they came from. Now what you need to do is to implement hitTesting. Is anything covering me? am i within the clickable area of my self. aka Boundary.

Possible solution 4: (<—Very likely the final solution) After another research sweep I figured out that if you override acceptsFirstResponder the you should override the public var. this was not the case but ==something started to work==. If you pass the hitTest to all view children in your view. And in the subViews you do the same, if a child view is the last descendant then return self. You may even pass it down to CALayers since they have HitTest() as well as isWithin() then all mouseDown, mouseUp will trigger at each descending view. Even if the frames.size of any View is set to zero. I presume the reason I have to forward the hitTest call is because the frame.size is zero. This isn’t a big deal as you can do the forwarding in the InteractiveView. 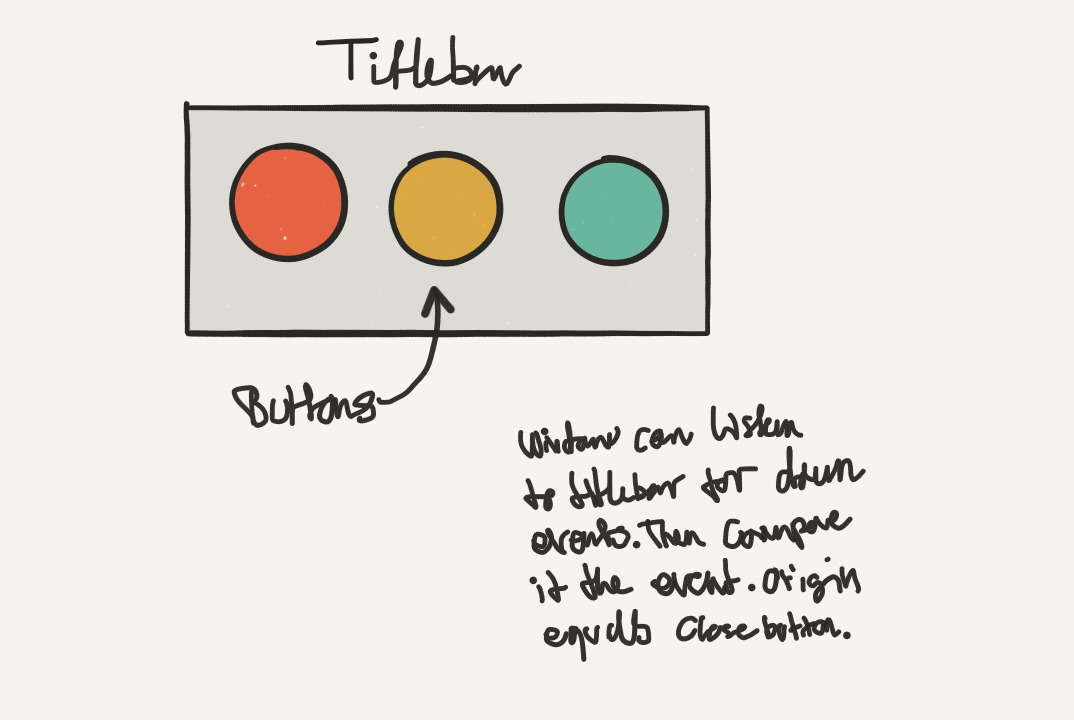 Solution for roll over roll out

In the assert that determines if the graphic was hit or not. You have to ask is my akin hit or is my elemnt children hit.

This should be the default behavior

If you want element children to be apart of the roll over then you must override the enter and exit method and implement this behavior.

Now the problem is a bit harder if you have nested children and say a btn 4 steps down in the stack is hovered and you want the crown parent to also hover but not say ui elements on level 2 and 3. To solve this you must think. BecAuse it might be important. Think focus ring etc.

NOTE: One could even imagine implementing true enter and exit methods that rely on path hitTesting not trackingArea hitTest. (it would first use trackingArea then if its inside resort to path hitTesting, optimization) this will require further mangling of the code, its possible though. a few extra line of code.

Couplling discussion It wouldn’t be considered coupling because only a copy of a rect would be passed. Although the coupling has already happened when skin knows about its parent. That being said. All NSViews knows about their parents after they have been added. So its not such a big deal. Parent child relationship coupling. The entire framework is coupled that way for now. And it doesn’t have to be if you design it in a way that the child only knows about its parent once its been added to its parent. Since the drawing wont happen until OSX wants it to happen. Unless you set the parent explicitly for special in-heritage circumstances.

the addGlobalMonitorForEventsMatchingMask can actually track mouse clicks outside its window, think Popover modal panels that are actually windows etc. Or dismiss dialogs etc. Click outside to dismiss etc.

This snippet will add mouseEventListeners to left and right click. (Its awesome but apple ==doesn’t want you to use it, unless the same action can be performed another way==) Also you can replace the closure with a regular function, just remove everything between the curly brackets.

This snippet will give you the localMousePosition in your view :

Assert if left mouse button is down:

Look into: (figure out their subtle differences)